With their signature colors, Senators Manny Villar and Mar Roxas are venturing into old tricks yet glamorous political stunts.  It’s amazingly annoying to see both ambitious individuals trying to sell themselves for 2010.

There is no need to argue that both are just promoting their advocacy because obviously they are doing everything to get into Malacanang.

Of course it is not bad to seek the highest position. And I don’t want to suggest that they’ll stop doing their marketing activities because 2010 is too close.

In one TV ad of Manny, he is seen standing in muddy field as he was acting as helping a duck farmer. And to my amazement, he was shown wiping his dirty hands on his orange shirt. And it was a close-up! It was disgustingly unnatural. Manny’s PR guys must go to Salug Valley in Mindanao and consult the farmers there how to wipe dirty hands on shirts!

Of course I love seeing Manny piling hollow blocks! I love to see him without the benefit of lights, camera, and director.

Mar, being among the weak material for presidential election in 2010 takes off with his offensive media stunts. In fact Mar is very visible now, trying to get as many interviews as he can. He also targeting the grassroots by airing radio ads about cheaper medicine and about insurance mess.

What is interesting for Mar is his sudden change of political mask – from calm and smart-sounding leader, he tried to take the role of a brave street activist which surprised many observers. Is he trying to create an image of former Senator Aquino who bravely attack the strongman – Ferdinand Marcos?

Manny and Mar have many things in common. Both are into political adverturism. Both are wealthy. Both wants to sleep in Malacanang for six years or more.

So Manny and Mar must spend more of their wealth to increase their chances in 2010!

Yes, it was Jamby Madrigal who suggested that Pia Cayetano be arrested for not attending a Senate session. But I want them both arrested. By the way, both are senators and are among the four women senators in the 14th Congress. 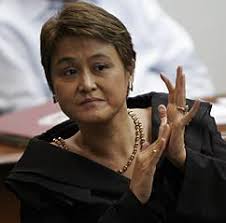 Their crime? Both make me laugh out loud since they started their cat and dog quarrels which converted the Senate floor into big venue for their political sitcom.

Now, what is the crime? Well, because I laugh out so loud, I got gas pain. So, I want both women in Senate to get arrested for inflicting gas pain to me and to all who get amused and annoyed with them.

I only heard these women they make extraordinary scenes fitted for a stand-up comedian. Okay, I heard about Jamby’s occasional walkout (an act fitted to a spoiled brat). I heard about poetic lines of Pia rebuttal. I can relate Pia more on the product she endorsed than her performance in the Senate.

The 14th Congress is becoming a playground of some Senators who are more concerned on their personal whereabouts than the welfare of Filipino people. That makes the 14th Congress less desirable.

Just think of it. At the height of annoying investigations, the Senators are too early and always present. Was it because there was live TV coverage?

Sometimes, I wonder if Senators really want to legislate or they want to get spotted by advertisers. See? There are many Senators who work part time as product endorsers.

Now, the reasons why many Senators are absent in their recent session might be their hectic schedule. Some may still negotiate with advertisers.

I hope no one among the senators read this post. Otherwise, one will surely call for a fruitless investigation. Anyway, I don’t insert any suspicious element in this post. No matter how disgusted I am, and how angry I am on the way Senators show their feathers in public, I will not say the famous line of a Senator who obviously got his ambition.

By the way, when both Pia and Jamby get arrested, I want them to audition to Pinoy Big Brother reality show. Who knows, that will be the start of more exciting career. Amen to that!

Yes, you read it right! In 2010, the most dramatic political battle will be Loren Legarda’s quest to get the NPC’s presidential nomination.

Earlier, NPC patriarch Danding Cojuangco announced that NPC will have Loren and Chiz. However, it was not clear if it will be Loren – Chiz tandem or Chiz – Loren tandem.

After the announcement, Loren Legarda’s body language seem tell everybody that she is the anointed one and she has the sure fire in 2010.

Will Loren gets NPC nomination?

That makes Loren so annoying. Yes, she is visible in surveys but her arrogance make her an annoying political material. Imagine, until this time, she still believes that she won in 2004! In her political ads, she spoke about corruption but she had been more visible as kidnapping negotiator rather than a figure in the battle against corruption.

When asked by reporters about her plan, she confidently revealed that she is ready to lead the Philippines. That raised the eyebrows of some. She even attempted to announce officially that she will run as president in 2010 during her birthday.

The best thing Loren must do now is to concede to Noli de Castro and control her smiles on TV. She will gain sympathy that way.

Will Chiz be the next President?

Here comes Chiz Escudero, a soft-spoken, close to the youth, humble and a fresh political material. Chiz is getting the attention of many. Many likes the way Chiz deals with his fate. He did not show arrogance. He never grow as proud as Loren. Filipino’s wisdom see that difference.

There are many chances that Chiz will be nominated as official presidential candidate of NPC. As reported, NPC will hold a national consultation. There are already indicators that most of NPC members will favor Chiz over Legarda.

A special consideration will also be the resistance of many to a woman president. In addition, Loren had shown her narrow view in joining a party. She just joined NPC becuase of personal reason.

Loren has just joined NPC. I think, NPC men will remember that. Besides, Loren appears to desperately want to get the highest position for political vindication.

Loren needs ‘to eat more rice and salt’ to get NPC nomination. Most likely she will be asked to run as Escudero’s vice president in 2010.

I doubt Loren will agree to run as vice president. Loren will have to either agree with party’s decision, or go back to the senate, or leave the party and run as president under other party.

Postscript: Chiz must also control his public appearances endorsing a product. He looks better as senator and future president rather than a product endorser.

Recently, I got a lengthy but very interesting comments which push me again to read the full text of House Bill No. 5043 (Reproductive Health and Population Development Act of 2008).

The comments came from Ipe Espinosa of Bacolod City. Espinosa pointed potential consequences when House Bill 5043 is enacted into law.

If Reproductive Health bill becomes law, the government, according to Espinosa, will be mandated to distribute free condoms to 4.9 million youth aged 15-27. This will give condom suppliers a very attractive sales – about 2.548 billion every year.

It was not mentioned by Espinosa if free condoms will also be distributed to Filipinos aged 28 and above.

Such bloated figures and claim startled me. Why do some assume that youth engage in sex at least once a week when there are free condoms? Will there be significant effect on sexual engagement frequency among the youth if condoms are not available?

Are condoms really distributed like candies by the government with Reproductive Health law? I doubt. I think there is misinterpretation here.

These 4.9 million youth who are recipients of the government’s free supply of condoms may naturally crave for sex like animals (considering the additional enticement from the immodest mass media and the internet pornography). The young male may act like boar while the young female behaves like gilt that is in heat.

I beg to disagree to this claim. Is there any basis for this very alarming claim? Is there any study that support the claim that when people recieve free condoms will get sexually active and crave for sex like animals?

On the goal of House Bill 5043, Espinosa wrote:

The ultimate aim of RH Bill, I understand, is achieving economic prosperity (particularly for the poor) however through population reduction approach. So there will be a future need to support for the passage into law of Pro-abortion Bills as well as of Pro-euthanasia Bills.

But House Bill 5043 is not about population control. It even says, the State upholds and promotes responsible parenthood, informed choice, birth spacing and respect for life in conformity with internationally recognized human rights standards.

I am very grateful to Ipe Espinosa of Bacolod City for sharing his ideas about House Bill 5043. After all, sharing of ideas will help us process our own opinions.