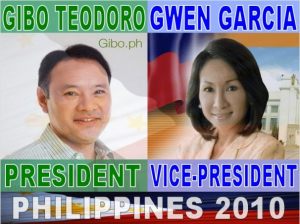 Has Garcia tempted to seek higher position? No one knows yet. The report in The Philippine Star says:

The tandem of Lakas-Kampi standard-bearer Defense Secretary Gilbert Teodoro and Cebu Gov. Gwendolyn Garcia for the 2010 elections is emerging as negotiations for what the administration sees as a powerhouse team-up are nearing the homestretch, officials said yesterday.

The report only mentioned ‘official’ and ‘the source’ making the story appears like test field of Teodoro-Garcia tandem. Gov. Gwen’s vice presidential bid remained as rumor.

Several months ago her name has been floated as good candidate for vice president. Gov. Gwen was cold on that hot news. She manifested that she will continue to serve as governor in Cebu rather than seek national position.

In her July 2009 State of the Province (SOPA) Address, she reiterated her intention to seek re-election for governor. Gwen reaffirmed […] that she was not running or seeking a higher office and will finish her last term as Governor of Cebu, wrote Bobit S. Avila in his column SHOOTING STRAIGHT.

Recently, Cebu noticed some hints. Lakas-Kampi-CMD officials announced that the party will hold national convention on November 12 in Cebu. Gilbert Teodoro’s running mate is expected to be announced on that day. Why in Cebu? Perhaps the administration is just too close to Cebuano’s. Or perhaps the party wants to tickle Cebuano’s on certain announcement.

Can we consider these as strong manifestation that the rumor is true? Let us wait until the right time comes, a close friend reminds me when I buzz him about this news.

In social network site, Facebook, some are asking who is Gwen Garcia. While Garcia has Evita Peron’s like popularity in Cebu as manifested with her landslide victory in 2007 election, she is not known in the national scene unlike Gov. Vilma Santos who is also being considered by Lakas-Kampi-CMD.

Gov. Gwen has a strong hold in Cebu and almost sure-win if she seeks re-election as governor. When she decides to run as vice president, her victory is very slim and thin.