Sinulog is both a religious and cultural activity celebrated every third Sunday of January. For this year’s Sinulog activities and other important information, I recommend you to visit http://www.cebudaily.com, mycebuphotoblog.wordpress.com, and of course the official Sinulog website http://www.sinulog.ph.

Notes: Many writers still make references to Sto. Niño de Cebu as patron saint of Cebu. Sto. Roman Catholic Church believe that since Sto. Niño is a representation of Jesus, He cannot be considered a patron. Cebu’s patroness is Our Lady of Guadalupe de Cebu [pontifical decree issued by the Vatican’s Congregation for Divine Worship and the Discipline of the Sacraments, May 9, 2006]. Even Sinulog’s official website still mentions the child Jesus Sr. Sto. Niño as the patron saint of Cebu. I hope this will be corrected soon.

Because Sinulog draws more than 2 million people (according to estimates), politicians drool to take part and take advantage of the celebration.

Cebuanos want to maintain the dignity of Sinulog by discouraging politicians to do political tricks (read as campaign) during the festival. 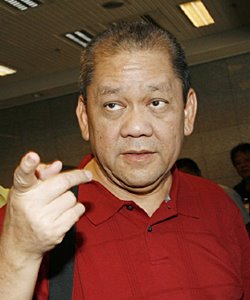 Mayor Tomas Osmeña (Cebu City) repeatedly warned local and national candidates who plan to take advantage of Sinulog. Floats and banners with names of politicians are definitely not allowed at the parade route nor inside Cebu City Sports Complex where the parade finale will be held. Tomas Osmeña ordered police to implement prohibition although the Philippine National Police admitted that there is no legal basis to prohibit politicians from campaigning during the Sinulog, PhilStar.com reports.

Tomas Osmeña’s message is clear, Sinulog should not be mixed with politics!

I am not sure if Mayor Tomas Osmeña heard himself.

For the first time, Cebu City will have a float entry for the Sinulog grand parade on January 17. The float is the city’s way of thanking the Sto. Niño for the City’s first sale of SRP (South Road Properties) lots last year, and for the full recovery of Mayor Tomas Osmeña from urinary bladder cancer, according to Sun Star Cebu report.

The intention at first sight is very good and I appreciate that. But I see the wicked motive of the the city’s float. The same Sun Star Cebu report notes that SRP-MO (SRP Management Office) staffers and the Mayor’s Management Team who will be on the float will be wearing their shirts that read “Suya Ra ang Probinsya.”

Gov. Garcia, in her reaction, considered Cebu City’s move as a petty move. It is not important to me whether Garcia is affected or not. It’s none of my business. What concerns me more is the political foolishness that will taint the mind of the people during the Sinulog parade. Instead of enjoying the parade and feel blessed, Cebuanos’ mind will be contaminated with the personal grudges of the two leaders. How sad.

I feel pity to City’s staff who will wear the Suya Ra ang Probinsya shirt. I don’t know if they feel proud of it. If I were one of them, I would wish to get sick on Sunday and stay in hospital than being used to taunt a politician!

I see a picture of Mayor Tomas wearing his Suya Ra ang Probinsya shirt. He looked great on it. Yes, he was. But will the City’s staff look great with it? They might look great but I doubt if they would feel great.

I suggest (actually, hopping) that Cebu City hall reconsider their move and respect the Cebuanos and the Sinulog celebration. More than that, respect Sto. Niño de Cebu. There is still time to reconsider.

I include that in my prayers.

Pit Señor! God bless us all.