May 2, 2010 is World Bloggers’ Day declares Cebu Bloggers Society. This would the first time such world blogging event is observed.

The first World Bloggers’ Day, as published in BigNew.Biz, will take place on May 2, in the Queen City of the South — Cebu, Philippines. 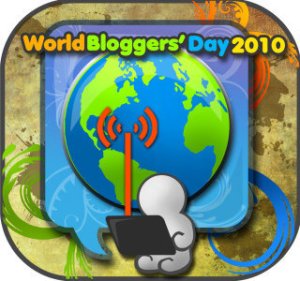 feature the Blogger of the Day and the Best Cast-away Outfit Award while doing live blogging and many more. All bloggers, individuals or groups, are encouraged to participate in this remarkable day of the year!

All bloggers are invited to join this event! If you are in Cebu, you can come-and-meet us at Parkmall in Mandaue City, Cebu.

Will you vote (presidentialCandidate) or (anotherPresidentialcandidate)? A good friend from my hometown in Mindanao asked me through text (SMS).

Unfortunately, he only mentioned two names. There are 9 presidential candidates to choose. Apparently, only the very popular candidates are usually mentioned. Because I know that he knows I am vocal on my support to one presidential candidate, I suspect he wanted to engage another lengthy campaign discussions. I think of another thing. I want to share to him about Vote God advocacy. 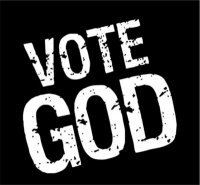 Intriguing indeed! How can we vote God who is not even a candidate? In Vernon’s article he suggested (which inspire me),

Look to your conscience and choose the way of GOD! Do not just listen or even take the word of these aspiring public servants but instead do your research and I encourage you to use this L-A-S-E-R test as your guide.

Another blogger who mentioned about Vote God crafted the striking truth when she wrote that deciding who to vote lies in our minds, hearts, and hands. Isn’t her post Let’s Vote God sounds equally intriguing as Vernon’s?

Recently, I wrote and I asked, Do your candidates pass the LASER test for Election 2010? In that post, I mentioned about Vote God campaign by the Dilaab Foundation.

What is Vote God?

Going back to my friend. As expected my friend exploded with quick reactions. Unsa na nga klase nga joke bai?

Of course you know that I was not kidding. Later my friend understood what I meant. Thanks to God and thanks to Skype. (smile)

Vote God, as described, is a

[..] faith-impelled advocacy which hopes to infuse the electoral process with Christian values and for the discerning bloc to muster enough moral courage to choose good over evil, even the lesser evil, during the elections.

It is choosing the way of  God!

I think you are also eager to know about Vote God. Instead of copying and pasting the Frequently Asked Questions about Vote God, I would point to you the primary source. Please visit http://www.votegod.net.

On April 22, millions of people in different nations will take action and unite to show love to our only Earth. April 22 is Earth Day!

Earth Day 2010 is significant because it is the 40th Earth Day celebration. Earth Day started on April 22, 1970 in the United States.

Forty years after the first Earth Day, the world is in greater peril than ever. While climate change is the greatest challenge of our time, it also presents the greatest opportunity – an unprecedented opportunity to build a healthy, prosperous, clean energy economy now and for the future.

How’s our Earth? The question, to be more specific should be: how’s your environment?

Even a grade 5 student can tell you about how the face of earth is destroyed. A second year high school can explain to you how environmental abuse relate to climate change.

We may be aware. It’s on how we work on our awareness.

For example, garbage segregation seems simple as it sounds but actually difficult to implement. I can cite what happen here in Mandaue City. When the city’s dumping site was closed, the government initiated garbage-segregation. But the program did not really sustained.

It’s election and election here in the Philippines is literally dirty with all the garbage (mostly plastic-made campaign materials. Imagine how our cities look after election.

Here is the buzzword called climate change. Though the Philippines is not a major contributor to global warming but recent events shown that our country is highly vulnerable to natural disasters and abrupt change to climate.

Now, the country is experiencing a very dry season. In an episode of iWitness, the impact of dry season was felt. It showed how people in Masbate are surviving with very little water.

Here is a teaser of the TV program:

Water mixed with mud. Water that tastes like mud. This is what residents in Sampad, Masbate must deal with on a day to day basis. With no permanent source of clean water, they dig wells with their bare hands hoping to tap into some water from the earth. But with widespread drought, the dug wells bring little relief.

I wrote, Minimizing the impact El Niño phenomenon, to remind everyone that while we cannot stop the dry spell, we can actually do something to minimize its effects.

We already felt the effect of climate change; we are getting back what we give to Earth. But of course, it is not yet too late. We can still act. Let us take action.

I believe the best Earth image is the Blue Marble. The Blue Marble is a famous photograph of the Earth taken on December 7, 1972, by the crew of the Apollo 17 spacecraft at a distance of about 45,000 kilometres (28,000 mi). (Source: Wikipedia; Image below also from Wikipedia)

I suggest that you will take a look and appreciate the beauty of our Earth in 30 seconds. Look at the Blue Marble below then answer my question.

What can you do to help save our only Earth?

As voters, we also need to do our homework. This is the reminder of a very good friend Novell Tagailo. By the way he is the same person who advocates that everyone should go out and vote on May 10, 2010 because we, the voters are  the reason, why there is an election.

So here is one of the most important homework that we should do: LASER Test.

What is LASER Test?

LASER is an acronym for Lifestyle, Action, Supporters, Election Conduct and Reputation. You should vote to candidates who pass the LASER Test. I will tell you why.

Even before the election campaign started, we were already bombarded with tons of information about the candidates. The information are mostly conflicting, confusing, and misleading. I believe you have your own frustration on the way election campaign is run. It is characterized by negative stuff, mudslinging, personality assassination, and full of finger-pointing and accusations.

Let us not allow ourselves to get drowned on negatives; instead, let us light the flame of optimism that through one vote, we can make a difference.

This is the reason why I suggest that we use the LASER test and major basis for electing our country’s next leader. As a little background, LASER test is conceptualized by Dilaab Foundation to help us voters discern the best candidate to vote on May 10, 2010.

The LASER test for election 2010 candidates are part of the campaign called Vote God. As described, Vote God is a faith-impelled advocacy which hopes to infuse the electoral process with Christian values and for the discerning bloc to muster enough moral courage to choose good leaders. 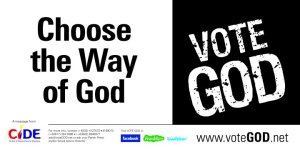 I will tell you more about Vote God advocacy on my next post.

The LASER test is best understood in the context of Christian values. When you run the LASER test to your candidates, it is very important that you put God at the center. By doing this, you erase the political color you already put on yourselves.

Let us pause and reflect. This is about our future.

Let us do our homework. We still have time.

In a pamphlet, Cockfight, Horserace, Boxing Match (Why Elections are Covered as Sport) published by the Philippine Center for Investigative Journalism (2004), journalist Sheila Coronel wrote:

Philippine elections have always been intense political exercises. […] No other event can mobilize so many citizens in such a concentrated period of time as election can.

The Catholic Bishops Conference of the Philippines (CBCP) observed:

[The] Philippine politics – the way it is practised – has been most hurtful of us as a people. It is possibly the biggest bane in our life as a nation and the most pernicious obstacle to our achieving of full human development.

(stated in 1997 Pastoral Exhortation on Politics)

The Vote God campaign launched recently by the Dilaab Foundation serve as our guide on May 10, 2010.  It calls us to take roles on the most intense political exercises we have in this country. Instead of hurting each other; instead of shaming each other; we can work together to make election the most pleasant experience for all of us.

Together, let us take roles for a clean, honest, and peaceful election. Let us choose the way of God.